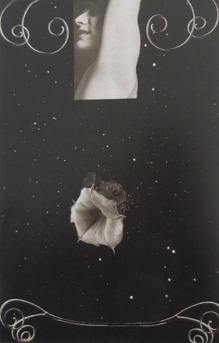 The Marriage between Heaven and Earth

In my book of dreams Spiral Nights (Nattens salt), the reader accompanies man on his inward and outward journey. Travelling with him, the reader encounters inside and outside himself the dynamic spiral, connecting what is intimate and what is remote. The spirals create correspondences between microforms and macroforms, between the spiral galaxies of cosmic space and the DNA-spirals of the cells, between the sweep of the whirlwind and the suction of the whirlpool, between the shapes of spiral architecture and the umbilical cord. In my book the spiral is the principle guiding the traveler in the night, where everything is very near yet far-away. 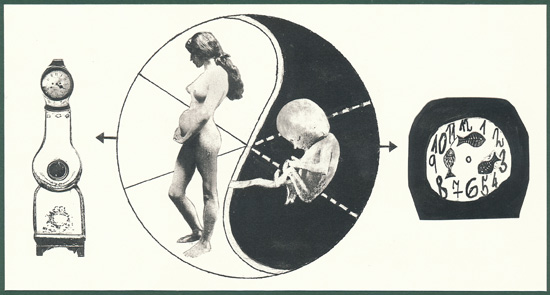 No Time and
Present Time

June 9, 2000, published "No Time and Present Time" from Spiral Nights by Michael Gregaard (72 pp. Aarhus, Denmark: Husets Forlag, 1999-2000), which focuses on one of nature's basic forms: the spiral. Spiral Nights is visual poetry; the individual titles of the poems are given in both Danish and English. 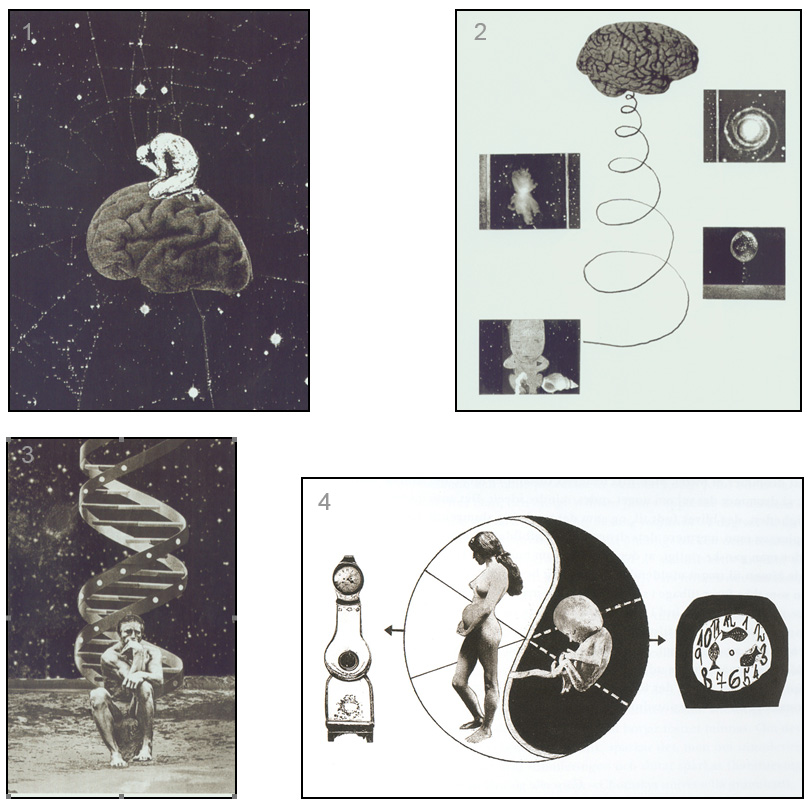 In one of the galaxies of the universe man lives on a small rotating globe in periodic motion about the Sun providing energy to the processes of life on this living drop in the infinite ocean of the universe. Here the spider builds its wheel shaped web and the twining plant spirals its way up the tree. Human knowledge about and understanding of the Cosmos grows exponentially almost as in a collective spiral of learning in which the thinkers periodically return with answers to the fundamental questions of life and about nature’s organization. The results are stored fragmentarily in the curled folds of the brain of each individual human being through education and teaching. From the twisted double spiral of the DNA molecule life has come into existence, and in space part of the material in the universe has taken the shape of rotating spiral mists expanding about a spiral point shortly after The Big Bang.

The periodic motion in the circle and the infinite continued motion in the line are fundamental motions, which as indicated are combined in fascinating ways in spiral motions in the Cosmos. In suitable interpretations these geometrical shapes also put a mark on man’s organization of life as in the periodic subdivision of day and night in hours and the linear advancing in the calendar. In daily life one speaks about thought spirals in which one’s insight grows in a good thought spiral whereas one gets nowhere by circular thinking in a bad one.

If the path of a motion in the plane spirals about a point so that the spiral at all points makes a constant angle to the line to the spiral point, the spiral is a so-called logarithmic spiral. The logarithmic spiral can be seen in the shell of the primitive cuttlefish called the nautilus when the shell is cut into two parts, and in a spatial version, where the spiral is placed along a cone spiralling about the apex as in the turning of the shell of a snail. If the spiral curve follows a cylinder such that it makes a constant angle with the generating parallel lines in the cylinder, one gets a so-called helix, which is the type of curve that a twining plant follows on a tree in its upward course towards the life-giving Sun. It is also the curve type in the twisted double spiral of the DNA molecule. The constant angle that a helix makes with the generators of a cylinder combines this spatial curve with a logarithmic spiral in the projection plane for a perspective along the axis of the cylinder. This can be seen faintly in the curve of the banister when looking up a long spiral staircase. The helix is effective in nature since it follows the shortest path on the surface of the cylinder relative to the number of turnings.

In connection with these mathematical structures I have a thought which tickles my fancy, namely that we ourselves from embryo to adult have developed and taken shape following the principles in the logarithmic spirals and the golden section. When we lie in the womb inside our mother’s stomach we are curled up in a kind of logarithmic spiral about the navel to make best possible use of the small space. And later on, the navel divides the body in the golden section. It therefore lies close by to believe that our sympathy for these mathematical structures has been encoded into the genes right from the beginning in the fertilized egg. At this moment it stays an unconfirmed theory that will hardly satisfy the requirement to a scientific theory formulated by the Austrian-British philosopher Karl Popper that it should in principle be possible to falsify it. But nevertheless, maybe one day in the future an embryo during its spiralling mental development to adult will find the truth about this conjecture in its folded brain. The collages by Gregaard gave me that hope.

I wish to thank Henning Smidth, who has carefully reproduced my visual poetry